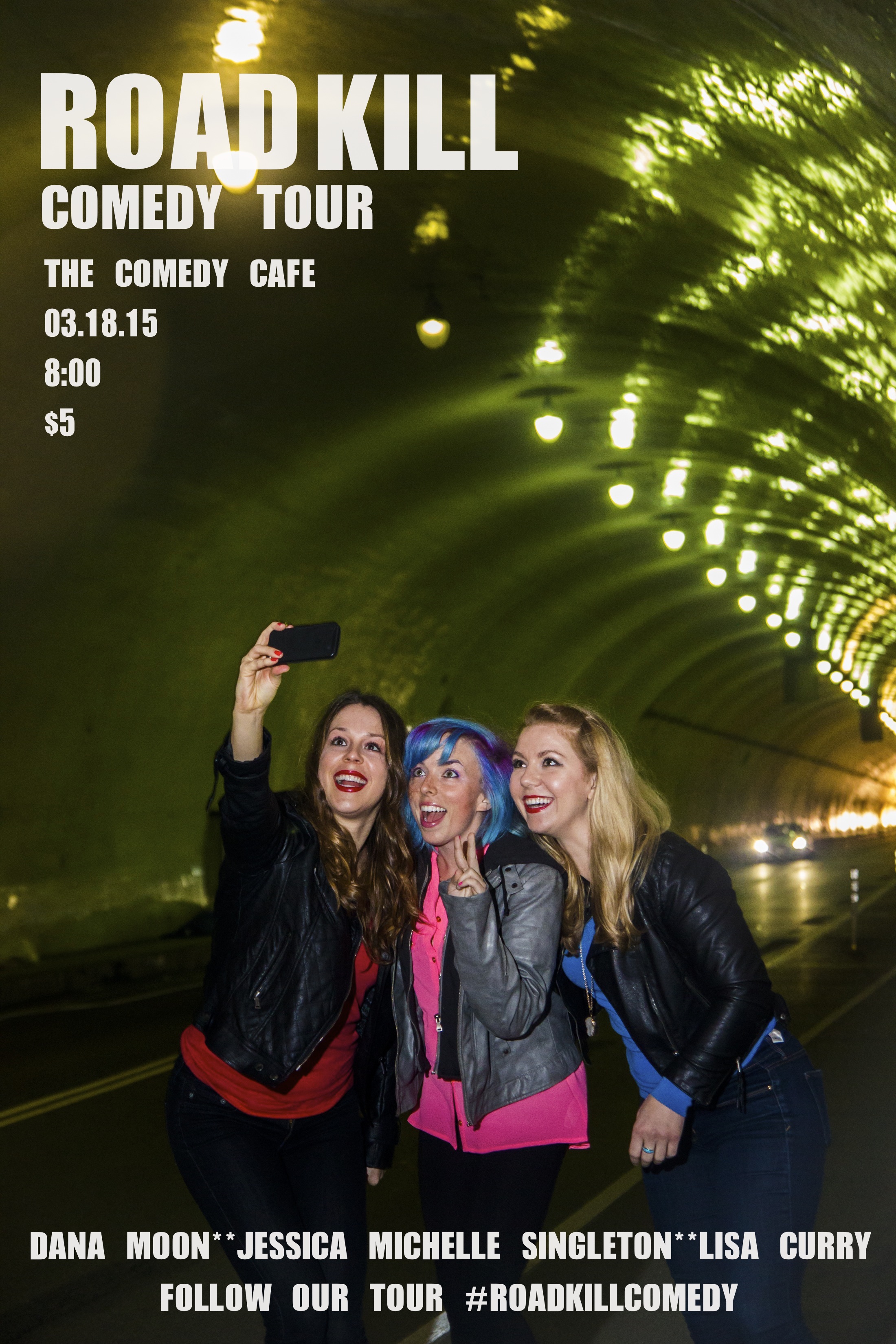 Milwaukee’s underground comedy scene may be embarking on a new breakthrough – touring comedians making Milwaukee a destination for up-and-coming comedians to spread their humor to residents of Cream City. The Road Kill Comedy Tour will be the first group of comedians from L.A. to make a stop in Milwaukee. The show will include Los Angeles-based comedians – Jessica Michelle Singleton, Dana Moon and Lisa Curry.

The comedy community in Milwaukee has been making some progress to attract more talent from across the country, and it’s succeeding to gain some attention from comedians from all over. These comedy tours will be an exciting addition to the already progressive movement for humor in the city.

The DIY Comedy Circuit has been growing over the last few years. It’s sort of like a ‘punk revival’ of touring for groups of comedians. It’s a highly respected undertaking, in the eyes of budding comedians. These tours can also benefit our city comedy scene and the comedians in Milwaukee.They provide inspiration to other aspiring comedians to get out of their comfort zones and give them a chance to build their understanding of the business side of touring and booking. It also provides a chance for local comedians to network with others from the around the country. It’s a chance to learn from, inspire and support each other on fulfilling our dream of making people laugh.

The comedians will be performing at 8 p.m. on Wednesday, March 18, at Milwaukee’s Comedy Café, 615 E. Brady St. The tour will be filmed for a television docu-series produced by Mad Cow Productions. Jessica Michelle, Dana and Lisa will be recording and documenting their journey as they drive from city to city performing live stand-up comedy shows for people across America. (So basically, if you attend the show at Comedy Café your laughs could be heard on the telly!)

Milwaukee Comedy’s Steve Breese had a chance to talk about the Road Kill Comedy Tour with Dana Moon.

Milwaukee Comedy: Can you tell us a little about behind the Road Kill Comedy Tour? It has an interesting name. Will there be lots of documenting and collecting of road kill on this road trip?

Dana: We were originally the Walk of Shame Tour but had to change our name for the networks that are pitching us. We decided on Road Kill because we thought it was a fun play on words that are descriptive comedy terms. Also, Lisa will probably end up killing one animal while tweeting and driving.

Milwaukee Comedy: This tour will be part of a docu-series similar to your last tour, Walk Of Shame Comedy Tour. What sort of extra work and planning goes into creating a show around a tour?

Dana: There is a variety of work that goes into making a show, but at this point for us, the most important part is remembering to bring the camera and turn it on. The challenge is capturing real moments without forcing anything or censoring ourselves. At the moment, we don’t have a camera crew, so everything falls on us. It can get very stressful at times.

Milwaukee Comedy: This will be your second tour as a group. How did you guys team up? What prompted the tours?

Dana: We all perform in Los Angeles and bonded over frustration due to a lack of stage time. We all felt that our growth as performers was stunted, and in order to get better, we needed more opportunity, so we made our own.

Milwaukee Comedy: What were some surprises you came across on the road? Any exciting stories occur on the road? Or do you spend a lot of time in the car driving from gig to gig? What do you do to keep yourselves entertained?

Dana: Well we are comedians, so keeping ourselves entertained is never a problem. It felt as if we spent the entire time on tour in the car driving. The second tour is arranged so there is less driving, so I think everyone is really excited about not living out of a Jetta for a month and maybe getting to experience more of the cities.

Milwaukee Comedy: Have any of you ever been to Milwaukee (or Wisconsin)? Do you have any special interests in the city? Looking forward to seeing anything specific?

Dana: Cheese. Jessica Michelle and I are specifically coming for the cheese. We assume Lisa is looking forward to going to the Harley Davidson museum while I will be cutting cheese, and Jessica Michelle will be eating it. We love cheese. Cheese.

Milwaukee Comedy: More DIY tours have been popping up in the comedy scene (Or at least it has been something I’ve noticed more often.). Why do you think this is happening? Is there a new approach to building a comedy career?

Dana: Yeah, I definitely have noticed that as well, with the Internet being so accessible to everyone, it makes it a lot easier to build your own audience and promote shows. Since our first tour, there have been several groups of comics in L.A. that have told us we inspired them to start their own tour, so that’s a really, really good feeling for all of us.

Milwaukee Comedy: What were some of the things you learned from the first tour to help shape this second tour?

Dana: Driving. We learned that no more than five hours of driving between cities unless we have an extra day is a good idea. Promoting on social media is more effective than any other outlet. And basically, just keeping organized with all the show information and confirmations on one sheet. Spreadsheets. Spreadsheets make the world go round.

Milwaukee Comedy: How much work goes into setting up a tour? How did you execute those plans?

Dana: It’s more work than anyone will ever understand. Not only are we booking all the dates, we are setting up media – morning news, radio, newspaper, etcetera. Up until the tour, we are planning travel, lodging, constantly communicating with everyone to make sure there’s no overlap in promoting shows. While we are on the road, we are constantly working as well because not only are we responsible for performing on 15 shows, we have to make sure the shows run smoothly. We handle the ticket sales, sell merch, make sure the bookers are paying us out correctly, spending time with the fans after the show, recording money earned, money spent. It is constant work for three straight weeks, but the benefit of getting on stage and performing outweighs any of the work.

Milwaukee Comedy: Do you have any advice for comedians who are setting up their own tours?

Dana: Make sure you really know who you are working with. We all got lucky because we are such good friends and all get along really well. But I think what people don’t realize is other than the work, you are spending a lot of time with each other and experiencing a lot of ups and downs on the road, and it can be very stressful.

You can catch the laughs at Milwaukee’s Comedy Café (615 E. Brady St.) for only $5! You can find tickets here.  Interested in getting more information about the tour? Then follow Road Kill Comedy on Facebook here!

Comedy will always be a tough gig, but it’s always a fun experience. You can support it easily by sharing information about these cool shows and tours coming through Milwaukee. So tell a friend – or a stranger – about Road Kill Comedy Tour and join in on the fun!