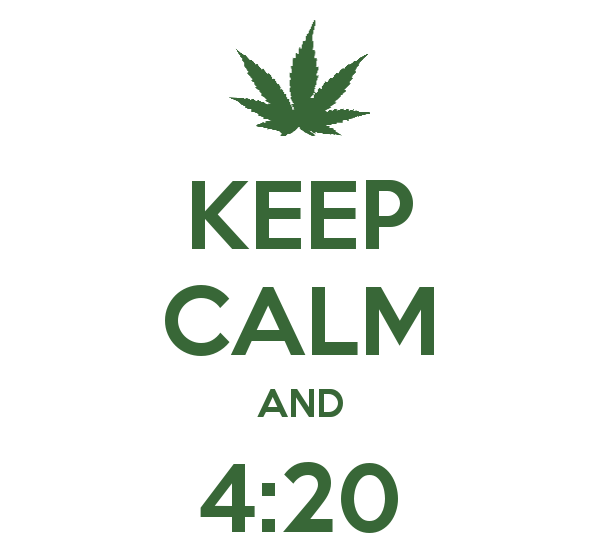 The Counter Culture sparked an oddball group called ‘The Waldos’ from the 1970s to launch a search to find the hidden paradise crop of abandoned marijuana plants called Four-Twenty Louis. The Waldos never succeeded to find the hidden stash and burned through most of theirs hanging out after class next to the Louis Pasteur Statue in San Rafael, California. 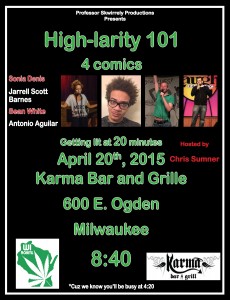 Today, the celebration of Four-Twenty continues to gather groups of like-minded friends and ‘adventurers’ to consume marijuana in search for a fun shared experience.

On Monday, April 20, Karma Bar and Grill, 600 E. Ogden Ave., will host all hungry pot-friendly patrons (or just hungry and ready to laugh patrons) to come join them after their token in The Sutra Lounge for The High-Larity 101 Comedy Show presented by Professor Skwirrely Productions and WI NORML. The show will feature four totally radical comedians getting lit at twenty minutes—performers include Chicago-based Sean White, Sonia Denis and Jarrel Scott Barnes, and Antonio Aguilar, from Madison. The host will be Professor Skwirrely (Christopher Sumner). The High-Larity begins at 8:40pm and costs $10. 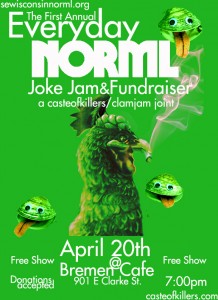 Also, in Riverwest, The South Eastern Wisconsin Chapter of NORML along with The Caste of Killers Comedy Collective and ClamJam Comedy are hosting another celebration of token laughs at Bremen Café, 901 E. Clarke St. The event will feature members of The Caste of Killers and Carmen Morales. Morales, from Chicago, has been  on Laughs on Fox and recently made an appearance on ‘Having a Few’ (a Milwaukee-based web series about drinking). The event will start at 7 p.m. and comedy open mic to follow. This is a free comedy showcase and open mic, open to the public. Donations are greatly appreciated. All proceeds will go to NORML as they continue their fight for legalization.