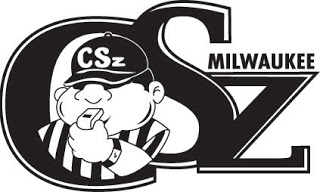 One highlight from the ComedySportz Recreational Leagueplayoffs last Sunday was when Moe Tremper, one of the amateur improvisers, proposed to his girlfriend, Lisa Tatsak, in the audience as part of a pretend town hall meeting.

Later on, another Rec League player, Victoria Shaw – who was not on stage at the time – asked an improvised panel playing ecstatic, Swedish and reggae-singing advisers what she should name her baby. (The reggae judge suggested Bob Marley, of course.)
Victoria first divulged she was with child earlier in the season by having the booth announcer introduce her to the audience – and fellow Rec Leaguers – as pregnant.
For nearly 30 years, Milwaukee-born ComedySportz has prided itself on providing comedy shows where grownups can laugh alongside kids. It calls itself the longest running all-ages comedy show in Wisconsin. It has become a family business, too, with co-founder Dick Chudnow’s kid, Nick Chudnow, increasingly involved.
This Sunday, May 5, marks the culmination of the Rec League playoffs with semi-finals matches at 2 p.m. and 3 p.m. and the championship at 4 p.m., at 420 S. 1st St. The winner gets to play in a professional prime-time ComedySportz show. Admission is free.

The bar and family-friendly restaurant will be open, too.