We usually spend this time of year complaining about snow – but this year it’s the lack of it.  Good thing Milwaukee Comedy has enough happening in the month of December to make you forget how much you hate the moderately cold and slushy weather. We have a little something for everyone this holiday season, whether you are looking to get involved yourself or you just want to come to a show and laugh. Here is a run-down for your laughs this season!

If you’re funny like us, then you’re in luck, because Milwaukee Comedy is holding Open Auditions for paid, on-stage work in improvisation, sketch comedy and acting gigs of all kinds! So if you think you’re the next big shot comedian, then come and PROVE IT. We don’t take to threats lightly my friends, so come show us what you got, and get down with your funny self.

Open call for actors, comedians and funny folks of all kinds! Milwaukee Comedy is holding Open Auditions for individuals and groups for paid, on-stage work in improvisation, sketch comedy and acting gigs of all kinds. Matt Kemple and Patrick Schmitz, producers of the Milwaukee Comedy Festival and countless other successful comedy shows are forming a talent pool to be considered for a variety of Milwaukee-based comedy productions, including popular ongoing shows Retro Comedy Night, Sketch 22, and an all new improv House Team.  More info and form to secure a slot here. 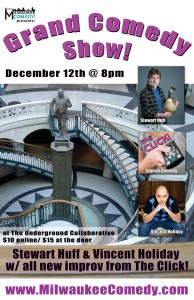 We have three very big shows in December that you should be STOKED for, like we are! First up is The Grand Comedy Show coming your way December 12th, at the Underground Collaborative. This show is going to be nuts, so you do not want to miss it. We have stand up comedians Steward Huff and Vincent Holiday in our midst as well as a segment by our very own The Click!

Welcome comedian Vincent Holiday, improv comedy powerhouses The Click! and headliner Stewart Huff to the stage December 12th at 8pm at The UC. Huff is a lovable southerner, Holiday is an adorable nerd, and both are hilarious! Pair that with The Click! a unique all woman comedy troupe taking Milwaukee by storm and you have the ultimate night of laughs. Tickets and more Info!

Next is our favorite monthly showcase in Greenfield, the Brass Tap Comedy Hour! Come down and laugh on Wednesday, Dec. 16th at Brass Tap in Greenfield, WI, where local comedians will be doing stand up while you drink a crap ton of beer. What could be better than that? Comedy and Beer the perfect marriage. Brass Tap has 80 different beers on tap along with a full menu, so join us as we drink and laugh our holiday blues away. Free show, over 80 beers on tap and a full menu!

“Milwaukee Comedy Presents…” is a monthly event held at the UC Theater and delivers to you, a night of fantastic entertainment with the best comedians from around the Midwest and we couldn’t be more excited to bring you Zach Peterson with J Tyler Menz as your feature! Presale is $10.00 online and $15 at the door. We expect the show to sell out, so get your tickets now and we’ll see you there!!