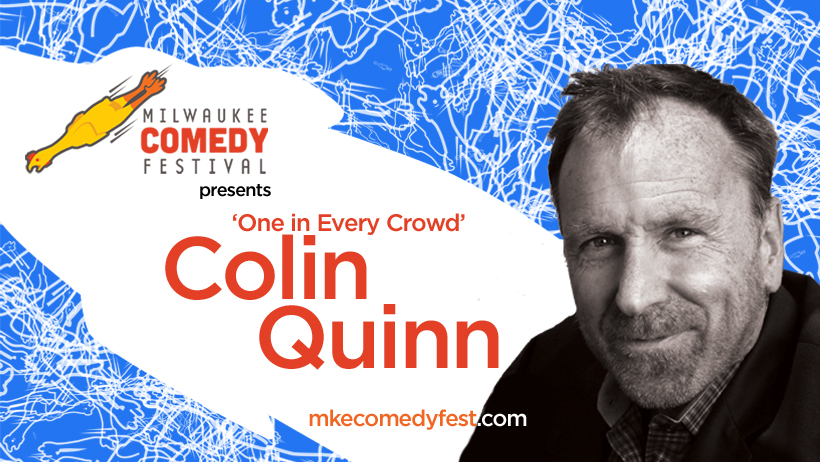 Milwaukee Comedy Festival presents:
Colin Quinn “One In Every Crowd”

From the old MTV days to SNL to Comedy Central to Broadway, CQ is apparently refusing to leave the business. So if you enjoyed his other one man shows, or you just are at a place in your life where you are lost and you need intelligent laughs, come see his new show. One In Every Crowd. Milwaukee Comedy Festival presents Colin Quinn, “One In Every Crowd” on Friday, August 3, 8pm at Turner Hall Ballroom.

Colin Quinn is a stand-up comedian, actor, and writer. On television, he is best known for his work on Saturday Night Live, where he anchored Weekend Update, on MTV’s 1980s game show Remote Control, where he served as the announcer/sidekick, and as host of Comedy Central’s late-night panel show Tough Crowd with Colin Quinn. Notable film work includes his role as Dooey in A Night at the Roxbury, Dickey Bailey in the Grown Ups films and playing Amy Schumer’s father in the film Trainwreck. Comedians such as Jerry Seinfeld and Dave Attell cite him as the quintessential New York comedian.

Quinn has also become known for his comedic one-man shows that offer his unique takes on history and growing up in New York City. As of 2015, he has written and starred in five shows: Irish Wake, My Two Cents, Long Story Short, Unconstitutional, and The New York Story, two of which he collaborated on with Seinfeld as director. Long Story Short was filmed as an HBO special that aired on April 9, 2011 and Unconstitutional and The New York Story were released as Netflix specials. In 2004, Quinn was named No. 56 on Comedy Central’s list of the 100 greatest stand-up comedians of all-time.