The Milwaukee Record called it “a true local treasure” and “pretty much the perfect celebration of comedy in Milwaukee“.  We think it’s pretty funny, and have spent the last 10 years growing the Milwaukee Comedy Festival into the largest multi-day comedy event in Wisconsin. In fact there are more than a dozen different shows and events in Wisconsin’s largest comedy event. When it’s this iconic, it’s helpful to offer the Complete Guide to the 2015 Milwaukee Comedy Festival! We tackle the BIG questions like: is there parking? (yes, and FREE!) and is there a bar? (yes, but not free). Keep reading if you want more info than that. We’ll start this out nice and easy.

Expect to see some of the best comedians around – many of them have appeared on television and tour across the country!  Every show in the comedy festival is different and features live stand up, improv and sketch comedy, along with prizes for the audience, special events and the final show featuring the hilarious Brian Posehn at the Historic Turner Hall!

But How do you choose from so much comedy?! Check out videos and comic bios for every act so you can pick which shows you want to see, which is helpful because dozens 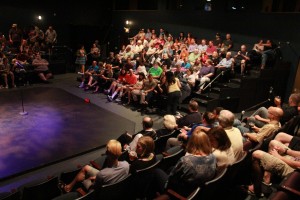 of the best comedy acts from across the continent will be performing live on stage!

Seating is General Admission for all shows. Each show requires a single ticket or an All Access Pass to enter. Take a look at the Schedule of Events to see how massive this comedy festival really is! Buy your tickets ahead of time as shows often sell out! Shows are recommended for those 16+.

For being a large event, it’s down right affordable. Tickets are only $14 if you buy ’em online now, or $18 at the door.  Tickets to see Brian Posehn are only $20. If you plan to indulge in comedy like you do for Thanksgiving dinner, be sure to grab an All Access Pass. Less indigestion, and there are some great perks (like a cool lanyard and picking your seat before anyone else!). It saves you a few bucks too, $50 to get into 14 different shows and events! Word on the street is there is a limited number, so grab one while you can. If you’re interested in seeing shows ala carte, Single Tickets are only $14 if you buy them now, or you can wait and pay $18 day of the show. You can also call the Next Act Theatre box office at 414-278-0765 or visit them at 255 S. Water St., Milwaukee, WI 53204.  Remember, every ticket also get’s you into the Extra Laughs events free, so it’s an even better deal and more laughs!!

For some reason, multiple shows over 4 days just didn’t seem like enough laughs for the Milwaukee Comedy Festival this year, which is why we have some awesome extra special events planned! The official Comedy Fest Kick Off will take place at Lakefront Brewery along with a series of Extra Laughs: pre- and post-show events brought to you by Milwaukee Record. Here is the breakdown:

The Milwaukee Comedy Festival has a few different locations, but the majority of the

events take place at one of the best venues in town, Next Act Theatre, located in Historic Walker’s Point right by the Colectivo Foundry and the 88.9 Radio Milwaukee studio. There is Free Street Parking next to Next Act Theatre, 255 S. Water St. Don’t forget about the great restaurants, bars and coffee shops in the area. Here is a map! [su_gmap address=”255 S. Water St. Milwaukee, WI 53204″]

Learn a little about laughs with a series of improv workshops taught by industry professionals!  There are all levels of improv being offered, and are especially great for actors, comedians, or anyone looking to build confidence. All workshops take place at Next Act Theatre. Here is the breakdown:

The bottom line is, if you like to laugh, the Milwaukee Comedy Festival is the best way to do it! Ton’s of live shows and lots of fun August 6-9th, 2015!

Looking for even more info? Check out the official Milwaukee Comedy Website: http://festival.milwaukeecomedy.com