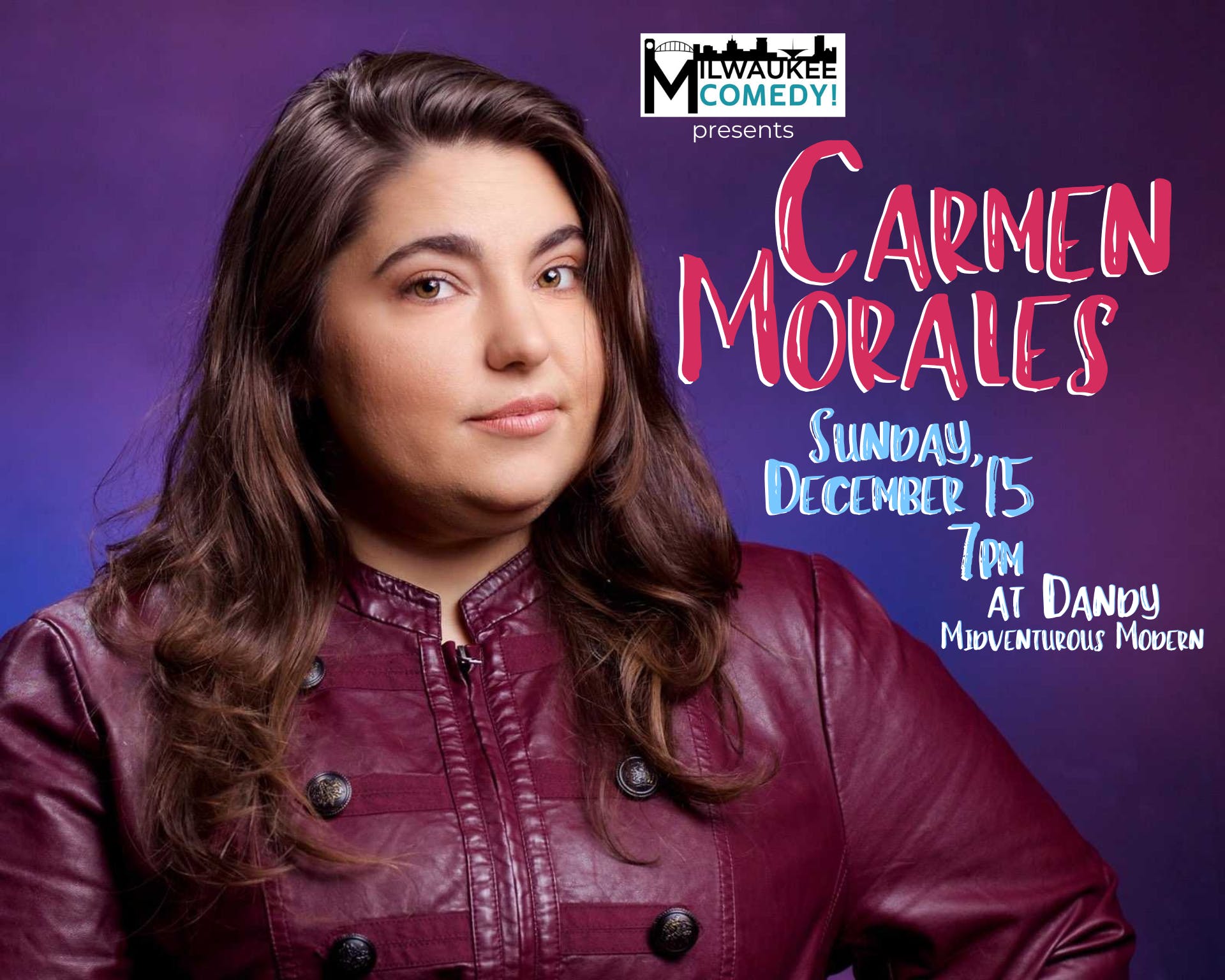 Carmen Morales is back in Milwaukee for one night only with special guest host Jackie Kashian!!

Milwaukee Comedy is proud to present a special, one night only performance from Carmen Morales, one of the best comedians touring today with special guest host, Milwaukee’s own, Jackie Kashian! This spectacular evening will be at one of our favorite venues, Dandy – Midventurous Modern, located at one of Milwaukee’s newest (and perhaps only) hybrid vintage store/event space. If you want laughs while also having access to a deal on a chair from the ’60s, this is the show for you.

Join us Sunday December 15th at 7pm at Dandy on Vliet St.

Carmen Morales has a captivating style which incorporates opinionated quick wit and outlandish characters. Taking from family, friends and people from everyday encounters she transforms into these characters seamlessly, then adds hilarious commentary which leaves the audience doubled over in laughter. With a perfect combination of like-ability and vulnerability she has been well received by audiences internationally. She’s been seen on two seasons of the tv show “Laughs” on Fox and heard on Sirius XM radio in the U.S. and Canada. She’s also been featured in Gilda’s LaughFest Comedy Festival, the World Series of Comedy, Scruffy City Comedy Festival, Women of Comedy Festival, in the New York Times and has produced her own traveling comedy show, The ‘Not Your Average Broads of Comedy’ as well as performed in comedy clubs, colleges, strip malls, indie shows, dive bars, towns no one has ever heard of and military bases across the country.

Jackie Kashian is a comic whose current album, I Am Not The Hero Of This Story, was #1 comedy album on iTunes and Amazon and is critically acclaimed. She is in the thirteenth year of her podcast The Dork Forest, where she talks with people about what they love to do, think about and collect. She also has a podcast with Laurie Kilmartin where they complain and celebrate standup comedy. It is called The Jackie and Laurie Show.

About the venue!
Dandy – Midventurous Modern
Stuff for sale. Style for hire. Space for rent.

Dandy is a dream that somehow came true for its owners, Ryan and Jess (Day + Anderson = Dandy). Since October of 2017, the couple has preserved and transformed their old Milwaukee space into a jack-of-all-trades hot spot. Vintage furniture/décor/clothing in the front, event/production/performance space in the back. Getting married? Have an event? Want to collaborate? Get in touch! 414-982-5020 | shop@livedandy.com | @livedandy