Matt Braunger at The Laughing Tap 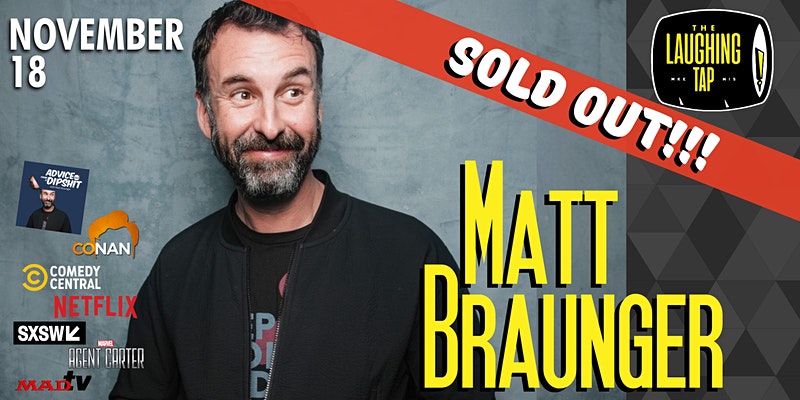 The hilarious Matt Braunger returns to Milwaukee for one night only at The Laughing Tap!

*NOTE* This show was rescheduled for Thursday, May 6th, 2021 from it’s original date.

Matt Braunger was raised in Portland, Oregon. A headlining comedian since 2007 and an actor since childhood, Matt studied theatre in New York and improvisation in Chicago. Matt’s television credits include starring in the Amazon pilot The New V.I.P.’s, recurring roles on ABC’s Agent Carter, NBC’s Up All Night, Netflix’s Disjointed, go90’s My Dead Ex, the Starz series Take My Wife, and the upcoming series Upload for Amazon. Matt was a series regular on Fox’s MADtv, a cast member of the TruTV series How to Be a Grown Up, as well as appearances on Carol’s Second Act, Superstore, Fuller House, Man with a Plan, BoJack Horseman, Stan Against Evil, I’m Dying Up Here, Garfunkel and Oates, Maron, HBO’s Family Tree, the Chelsea Lately roundtable, The Michael J Fox Show, Happy Endings, CONAN, The Tonight Show with Conan O’Brien, The Late Show with David Letterman, The Pete Holmes Show, United States of Tara, Pushing Daisies, Carpoolers, The Late Late Show with Craig Ferguson, Acceptable TV, and Live At Gotham.

Matt was also a regular guest on @midnight and appeared in Showtime’s SXSW Comedy with W. Kamau Bell and Comedy Central’s The Meltdown. He won the 2008 “Best Of The Fest” at the inaugural Rooftop Comedy Festival in Aspen. In 2009, he was named to Variety’s Top 10 Comics to Watch, and Comedy Central’s Hot 9 in ’09 list, his debut album Soak Up The Night was released by Comedy Central Records and he was named to the iTunes REWIND Top 20 Albums of 2009. In 2010, he recorded his half hour Comedy Central Presents special and in 2012 released his debut hour-long special entitled Shovel Fighter, also released as an album. Matt’s Second hour special, Big, Dumb Animal available on Netflix, and his newest special Finally Live in Portland is available on all digital platforms. He also has a hilarious podcast “Advice from a Dipshit”.

Along with touring comedy clubs across the country, Matt is also a regular at the Upright Citizens Brigade in Los Angeles, and he headlined the Old Milwaukee Comedy Tour for Funny Or Die in 2013. Matt has also performed at a variety of prestigious comedy festivals including the Just For Laughs Festival in Montreal and Chicago, The TBS Comedy Festival Las Vegas, and South By Southwest. Matt also co-founded the popular Bridgetown Comedy Festival that takes place in Portland.

Covid-19 UPDATE (in effect as of 9/17/21):
Milwaukee Comedy will require Proof of Vaccination OR a Negative Covid Test to attend our shows starting September 17th, 2021. This policy is for the safety of our guests, comics, and staff, and is inline with other venues in Milwaukee.

• Negative Covid Test result must be within 72 hours of show time.

Failure to comply with these policies will result in denied entrance and/or being asked to leave the club and no ticket refund. If you have purchased tickets to an upcoming show and are unable to attend because of this policy change, contact us via email PRIOR TO SHOW DATE and we will grant a full refund of your ticket purchase.