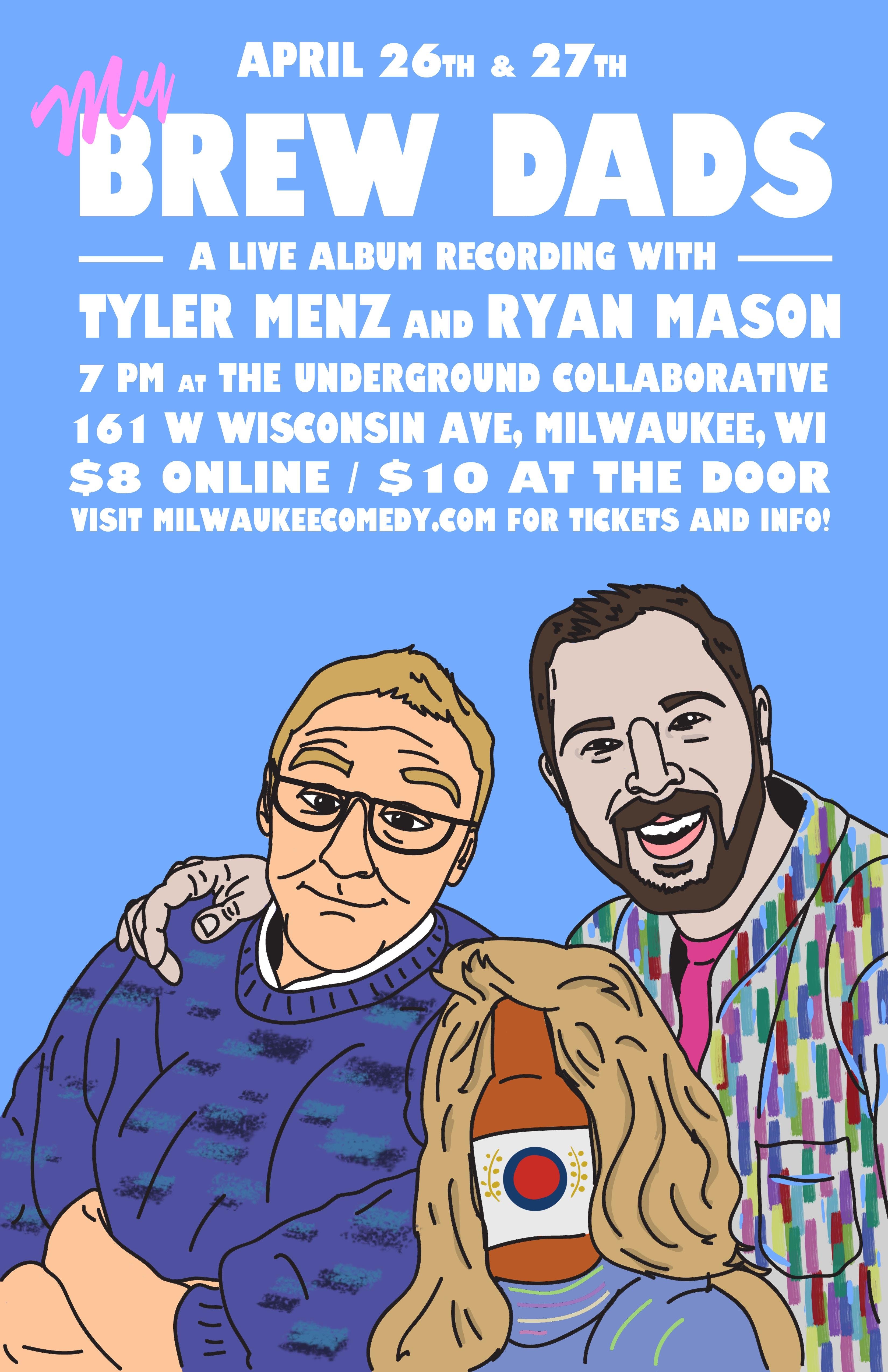 My Brew Dads is a live comedy album recording featuring comedians Ryan Mason and Tyler Menz at The Underground Collaborative. This exciting two-night event will be recorded through Milwaukee Comedy, with each comedian presenting the very best of their road-tested material.

Both Ryan and Tyler have been featured across the nation in clubs and festivals such as the Memphis Comedy Festival, Flyover Festival in St. Louis, 10,000 Laughs in Minnesota, Van’s Warped Tour, Gilda’s Laughfest, Cream City Comedy Festival and the Milwaukee Comedy Festival. Tyler has worked with a wide range of comedians, including Tig Notaro, Jim Norton, and Andy Kindler and has toured with Todd Barry, Christopher Titus and Steve-O of Jackass.  Ryan has featured alongside Kumail Nanjiani, Brian Posehn, Joe Mande and Dennis Miller while performing for the prestigious Pabst Theater Group.

Catch these two veterans of the Milwaukee Comedy scene on April 26th and 27th, and be a part of this exclusive event.

Online presale tickets are only $8.

More about the comics:

J Tyler Menz is one sweet pickle.Tyler’s humor draws on his experiences as an elementary school teacher, stories about his family, and his deep contempt of how painfully white he is. He has worked with a wide range of comedians, including Tig Notaro, Jim Norton, and Andy Kindler, and has toured as the featured act for Christopher Titus, Todd Barry, and Steve-O (which was cool because they have matching tattoos). In addition to performing stand up, Tyler produces and hosts many shows in the Milwaukee area and hosts the Eating It, a podcast in which comics share stories about bombing, bad sets, and shows gone wrong. He has also been seen performing at The Milwaukee Comedy Fest, Van’s Warped Tour, The 10,000 Laughs Comedy Festival, The Cream City Comedy Festival, and Gilda’s Laughfest. Tyler enjoys kale, farmers markets, his 1997 Hyundai Sonata, and reassuring people that he isn’t a snitch. Seriously guys, he is not a snitch. Check him out on social media @jtylermenz.

A veteran of the Milwaukee comedy scene, Ryan Mason‘s comedy touches on his own experiences as a parent and interpretations of everyday absurdities. Ryan has featured for some of the biggest names in comedy including Dennis Miller, Kumail Nanjiani, Brian Posehn, Joe Mande, Kevin Bozeman and Morgan Murphy. He has performed throughout the Midwest and United States in theaters, festivals (Memphis Comedy Fest, Milwaukee, and Cream City) and clubs (Comedy Café Milwaukee, Comedy Shrine Aurora, Jokerz Milwaukee, Comedy on State Madison, Zanies). Ryan has also served as a house comedian for the major venues in Milwaukee including the historic Riverside Theater, Potawatami Casino and Turner Hall.