Stand Up Science with Shane Mauss 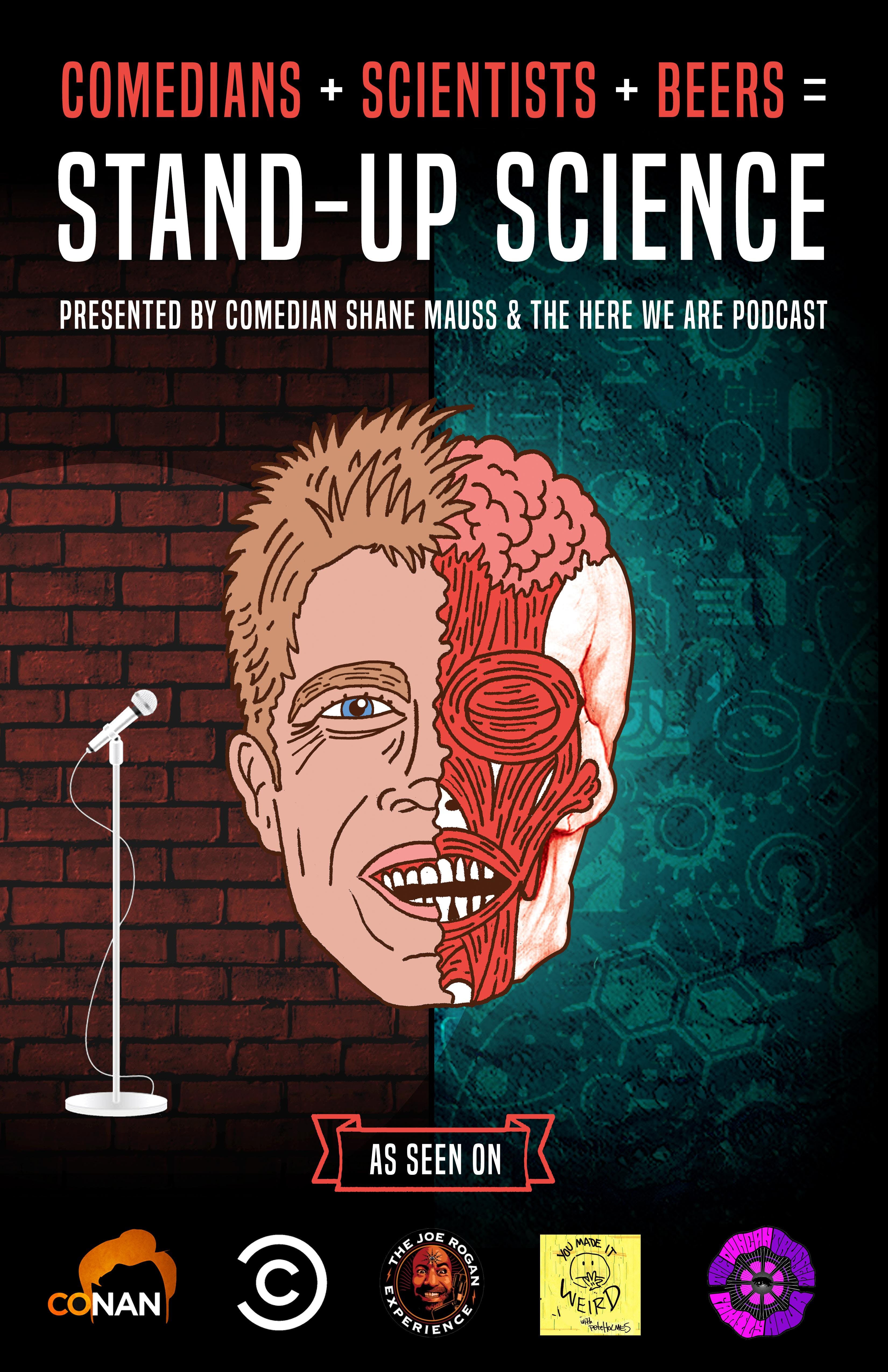 Learn and laugh as local scientists, comedians and other special guests join Shane to bring you an unforgettable 90 minute show that is equal parts ahas and hahas

Stand-up comedy and science have a lot in common. They both reveal truth, change our perceptions, and challenge the status quo. So why are they so underappreciated? Admittedly, comedy sometimes underestimates the intelligence of their audience, catering to the lowest common denominator. And science has the stigma of being overly complicated, unrelatable or boring. Until now.

Funnier and more provocative than TED Talks, while smarter than traditional stand-up comedy, Stand Up Science combines the best of both worlds. This thought-provoking night of laughs will leave you a little smarter, a little happier and send you home with plenty of fuel for your own conversations.

As your host, Shane kicks the evening off with some of his best material on brainy topics, before introducing special guest speakers and performers. Guests range from Ivy League professors presenting groundbreaking academic research to local stand-up comedians delivering their most cerebral material.

At the end of the night, Shane brings all the guests back onstage and opens the floor for a Q&A and interactive discussion with the audience.

About the host and origins of Stand-Up Science:

In one life, he tours full-time as a stand-up comedian. Shane has brought his unique blend of absurdist humor, thoughtful insights and storytelling to cities all over the world, as well as TV spots on Conan, Kimmel, Comedy Central, Showtime, BBC, Epix and more.

In his other life as the host of the podcast Here We Are, he’s interviewed over 200 of the world’s leading academic experts about our most fascinating traits and behaviors while finding the funny in the innermost workings of life. Each week Shane illuminates a new area of research for the show’s 50,000 loyal listeners, earning a 5-star rating on iTunes.

Shane’s unique background, comedy, and personal philosophies have also made him a popular guest on other top podcasts like Pete Holmes’ You Made It Weird, Marc Maron’s WTF, The Joe Rogan Experience, Duncan Trussell’s Family Hour, Bertcast and more.

Merry Wiesner-Hanks is Distinguished Professor of History and Women’s and Gender Studies at the University of Wisconsin-Milwaukee. She is the author or editor of thirty books and more than 100 articles on European and world history that have appeared in English, German, French, Italian, Spanish, Greek, Chinese, Turkish, and Korean.

Carter Deems has been performing comedy through stand up and competitive rap battles for the past eight years. His stand-up performances include wacky wordplay, absurd one liners, goofy poetry and complimentary battle rap lyrics.

He has been labeled as the “nicest battle rapper in the world” and was awarded the 2015 Funniest Battle Rapper award by Battlerap.com. His online videos have over 3 million views and his performances have been featured on Funny or Die, Snoop Dogg’s Gladiator School, LA Weekly, and Worldstar Hip Hop, and Andy Milonakis’ YouTube channel.

Dr. Karyn Frick completed her B.A. in Biology and Psychology at Franklin and Marshall College in Lancaster, PA. She then went on to earn her M.A. and Ph.D. in Psychology at The Johns Hopkins University in Baltimore, MD, where she used rodent models to study how aging affects learning and memory, and investigate potential treatments for reducing age-related memory decline. In her postdoctoral work at Wellesley College, Dr. Frick began studying how hormone loss due to reproductive aging impairs memory and influences brain function in female mice. She continued this work in her first faculty position in the Department of Psychology at Yale University. In 10 years at Yale, Dr. Frick and her students began a successful line of research identifying the molecular and cellular mechanisms through which sex steroid hormones like estradiol and progesterone regulate memory formation in young and aging mice. Dr. Frick was recruited to the UWM in 2010, where she is currently a Professor in the Neuroscience area of the Department of Psychology and Adjunct Professor in the Department of Pharmacology and Toxicology at the Medical College of Wisconsin. At UWM, Dr. Frick and her students have continued to make strides investigating the neural mechanisms underlying hormonal modulation of learning and memory. She is the author of over 80 publications and her research is funded by numerous federal and foundation sources. She is currently editing a book on estrogenic regulation of brain function for Oxford University Press.