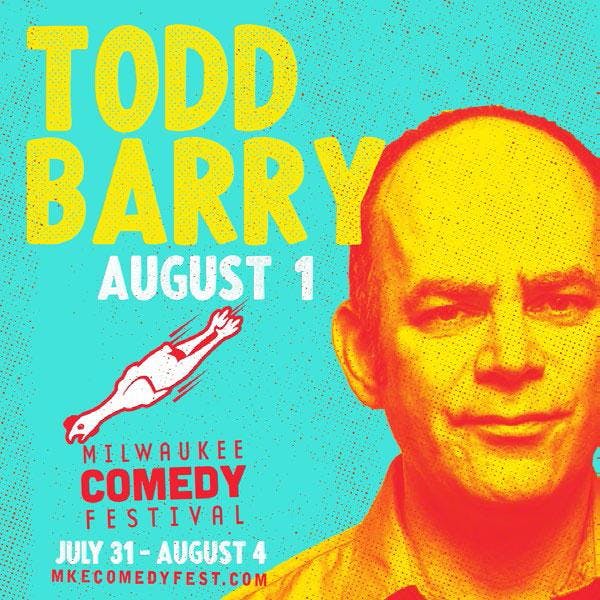 Milwaukee Comedy Festival is proud to present comedy legend Todd Barry (Netflix, Bob’s Burgers, The Late Show, Conan), headlining one night only Thursday, August 1st at 7:30pm at Shank Hall. Tickets are $20 for this event and will sell out! Doors open at 7pm.  Shank Hall is a 21+ venue.

Todd Barry has been performing stand up for over 30 years, has three hour-long stand up specials including on Netflix Spicy Honey, and appeared on The Late Show with Stephen Colbert, The Late Show with David Letterman, Conan and Late Night With Seth Meyers. He has also been in several films and television shows. Acting credits include The Wrestler, Road Trip, Flight of the Concords, Chappelle’s Show, Spin City, Sex and the City. You may have heard his voice on the animated series Bob’s Burgers, Dr. Katz, Professional Therapist, and Aqua Teen Hunger Force.

Todd is also the author of the critically-acclaimed 2017 travel memoir Thank You For Coming To Hattiesburg.

More information on the Milwaukee Comedy Festival at mkecomedyfest.com

The Milwaukee Comedy Festival is Wisconsin’s largest multi-day comedy event, celebrating 14 years presenting the best local, regional, and national comedic talent. The festival has featured top-notch stand-up, improv, and sketch comedy from across the country. Founded in 2006 as the Sketch and Improv Comedy Festival to support and grow the comedy scene in the city, the Milwaukee Comedy Festival quickly grew into Wisconsin’s premier annual comedy event attracting thousands of comedy fans every year.  MCF aspires to cultivate an active comedy community where performers can hone their craft, create new and exciting comedy, and foster an inviting environment for both audiences and fellow performers.

Over the years more than 18,000 people have laughed with the Milwaukee Comedy Festival. Audiences have traveled from all parts of Wisconsin to attend the fest, and as far away as Los Angeles to Boston for the city’s biggest comedy event of the year.  Since 2006, the festival has featured thousands of performers from across the country including New York, Chicago, Los Angeles, Seattle, Philadelphia, Denver and Austin as well as Canada including Toronto, Alberta and Vancouver. Our alumni have appeared in movies and television including Comedy Central, Netflix, HBO, Saturday Night Live, MAD TV, BET, Conan, Late Nite and many more.

More information on the 2019 Milwaukee Comedy Festival is available at http://mkeComedyFest.com/ or by emailing info@mkecomedyfest.com.