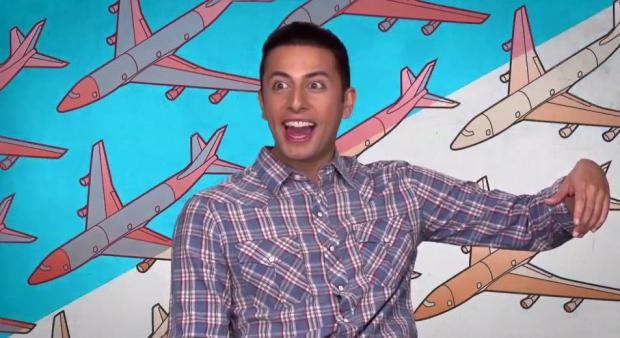 The Butcher, The Baker, The Grocer, The Comedian

An Interview with Fahim Anwar

Successfully reaching a milestone in an entertainer’s career is something worth a well-deserved amount of applause and appreciation. Fahim Anwar is well on his way to be one of more memorable names in modern comedy world. The melody of his comedy has rooms ringing with laughter and excitement during his performances. Fahim is a must watch for his live performances, however, for the first time you can view his comedy special—‘There’s No Business Like Show Business” —on NBC’s streaming service, Seeso TV, conveniently on your mobile devices in your home, office, or commute. He’s has got the flare, the wit, and the beaming smile of a star in the making.

Fahim Anwar is comedian who succeed in living his dream through a very sustainable method—having a plan. Anwar decided to create a career out of comedy through orchestrating a solid balance of hustle and livelihood—basically a strategy to create a finically stable shift from a career in aerospace engineering to stand up comedy. Anwar’s special touches on various subjects from absurdity of modern app technology from a historical point of view to hipster pigeons and rap music culture to the political climate with the current administration. He’s a well-rounded and talented voice in the current comedy culture.

Milwaukee Comedy got a chance to ask Fahim a few questions about his special, admiration for rap music, and dating in Los Angeles.

Milwaukee Comedy: ‘There’s No Business Like Show Business’—what dreary job did you bid goodbye for showbiz and why?

Fahim Anwar: I left aerospace engineering to do comedy full time. I’ve been doing standup since I was 18 so that was always the plan. Do what I have to do until I get to the point until I don’t. You don’t have to live in a car to do art. You can be smart about it.

MC: Can you describe some of the more challenging moments with creating your special with Seeso and Comedy Dynamics?

FA: There were no real challenging moments. It was pretty smooth the whole way through. They really let me do whatever I wanted and didn’t put any constraints on me or the material.

MC: What were some of the rewarding outcomes of the special?

FA: I think the most rewarding thing after doing a special and this being my first is that it’s a definitive comedy footprint. I’ve cobbled some late night sets here and there and done things in TV/Film but those are only slivers of who you are as a comedian. Things can still get lost in translation. They’re away games if you will. What’s great about having an hour out there is that is a 100% representation of me, my sensibilities and what I do.

MC: Did your parents attend the taping? What sort of review did they give you for on first comedy special?

FA: They were not at the special. They’ve seen the produced version of it obviously and they enjoyed it but then again I think they’re a bit biased.

MC: Who are your top 5 Deathrow record artists? Did you have a particular song from those artists which influenced you in some way growing up?

FA: I grew up in Seattle during the grunge boom but couldn’t care less about that. I was into west coast gangster rap. I was all about Snoop, Dogg Pound, Dre, Warren G and Tupac oh and Nate Dogg but that just goes without saying.

MC: Tupac dead or alive? And why?

FA: Dead. Don’t think a rapper can keep a gag going for this long. Also, cell phone cameras exist. Jig would have been up long ago.

MC: What kind of comparisons can you draw between rap and comedy?

FA: The hustle is pretty much the same. Getting people to care. It’s an art and a process. Combination of working on the craft, time and stars aligning.

MC: What is your take on dating in Los Angeles?

If you’re looking just to date then it’s a great city for that I guess. If you’re looking for something more I don’t think it’s the best place because it’s not really geared for that. Most people are here chasing something and serious relationships can be seen as an impedance unless you find a very understanding person. I forget which comic had a great quote about it, he said “One headshot per couple.”

MC: What were some of the more memorable dating experiences you have (good or bad)?

Fahim decided not to answer this question, so we’ll just drop a link to his appearance on MTV’s Disaster Date.

MC: Lance Cantstopolis made a short cameo in your special. What’s in store for Lance and why did he look upset at the end of your special?

FA: Oh yeah, I guess Lance caught the end of my set and was in the special. He seemed unimpressed because I think he thinks he’s so much better and raw. I’m up there doing these well constructed jokes and he’s just pure energy. I think jokes are a copout to him. He likes just showing up to a gig and seeing what happens. He literally has no plan when he hits the stage and it’s great. I hope he gets a special, TV show or something. He started a podcast which is cool. I did a documentary on him called “Lance Cantstopolis: Outta Nowhere” that’s on youtube. I’m really proud of it. I’m a fan of his.

Fahim Anwar can be caught regularly performing in Los Angeles at The Comedy Store and various other venues. Keep up to speed with Fahim by following him on Twitter or checking into his website for show dates. If you haven’t heard of him yet then start listening to his comedy today!