Quick, wake up it’s 2016!  If you have been asleep since last year, all you missed was the temperature finally dropping 45 degrees and snow found it’s way to us – but don’t worry – the Packers are still loosing so it’s not much different from December. 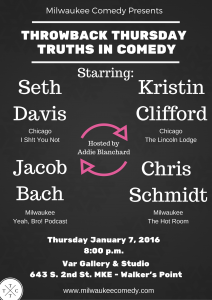 We are pumped up for all the great shows we have coming up (including an all new show we will announce soon!) More exciting than all that is the BIG COMEDY EVENTS we have coming your way!

Mark your calendars, we start things off right away this week with Throwback Thursday – Truths in Comedy a unique comedy experience connecting with you with honesty, all while providing with fantastic entertainment! Featuring Kristin Clifford (Lincoln Lodge, Chicago), Seth Davis (I Shit You Not, Chicago), Christopher Schmidt (Hot Room Comedy Showcase), Jacob D. Bach (Yeah, Bro Podcast), with your host Addie Blanchard (Caste of Killers Comedy Collective). Check it out at 8pm at Var Gallery and Studio in Walker’s Point, $10 at the door!

Our next mega event is the Damon Millard Live Album Recording: Shame, Pain and 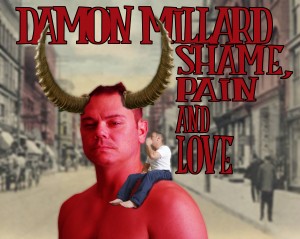 Love.  It’s not your typical light-hearted comedy show, Millard – one of the founders of the Caste of Killers – tackles some very heavy subjects including death, drug use, the after life, and coming to terms with one’s mediocrity. This event will be so big it’s happening over 2 days! Friday, February 26 and Saturday, February 27, 2016 both at 8:00pm. Ryan Lowe, a local legend is attached to perform his own set as well as in character as a very special guest. On Feb 27th Lara Beitz will be a featured opener along with a showcase of other local talent. 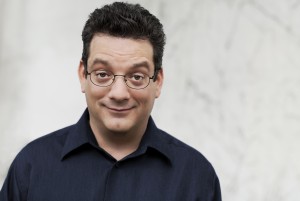 Our biggest act of the year (of those announced thus far…) is the hilarious Andy Kindler – who has appeared on the Late Show with David Letterman over 40 times – comes to Club Garibaldi in Bay View one night only on Monday, April 4th, 2016 at 8pm.  He is infamous for his scathing attacks on the world of entertainment, including the previously taboo practice of making fun of his fellow comedians. Andy currently recurs on IFC’s Maron and Fox’s hit animation, Bob’s Burgers.

The biggest surprise?  Still have tickets for all these great special events!