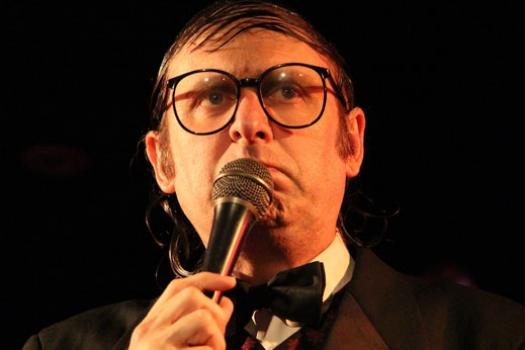 Sandwiched between appearances in Madison and Chicago, the “hardest working comedian in existence,” Neil Hamburger is coming to Milwaukee’s Club Garibaldi this week.

AKA Gregg Turkington, the brilliant parody of an overworked, underrated, greasy, middle-aged standup is returning to Milwaukee after a 2012 show at Shank Hall and a 2010 performance at the Pabst Theater as part of Adult Swim’s “Tim & Eric Awesome Tour.”

“He is, after all, one of the world’s greatest bad comedians, having perfected a brilliantly awful persona of an old-school, C-list funny man — the kind with an ill-fitting tuxedo and an enormous, greasy comb-over — on a very bad night. His timing is terrible, he breaks into coughing fits, and the few punchlines that he doesn’t flub are simply tasteless. But this is the genius of Neil Hamburger…”

Tickets for Hamburger are $14. Also on the bill is “Major Entertainer” Mike H, who described himself recently on Facebook as Hamburger’s “moderately humble opener with new songs about Heather and new jokes about HORROR!”