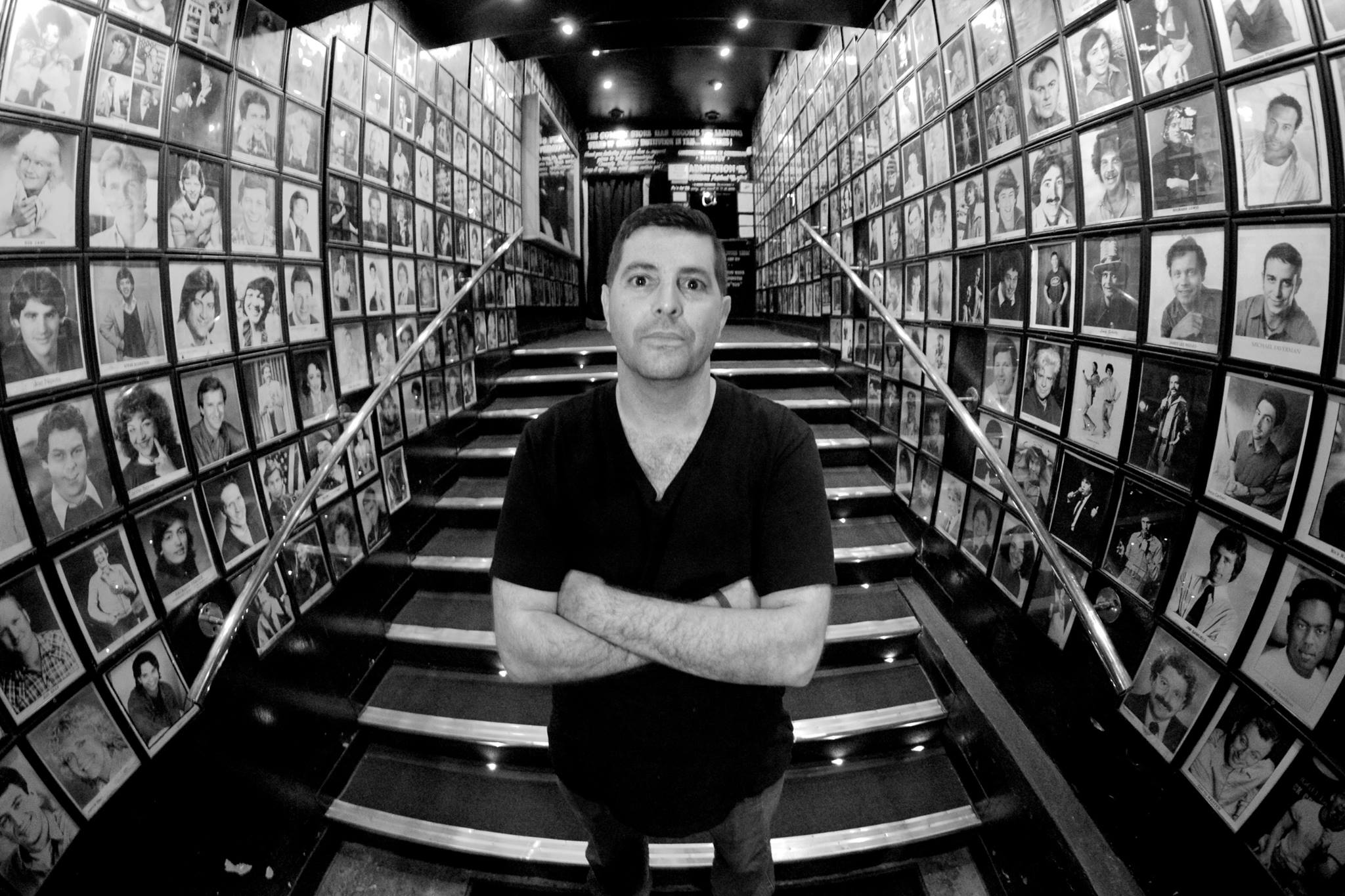 Sam Tripoli is a chaos regulator. He commands rooms with his performances through a powerhouse of a stage presence. Sam can draw in rowdy and unruly audiences through his heavy-duty quick wit, and he can pull out the beast inside the most timid audience. It’s actually a pretty beautiful and refreshing act that is not easy to pull off. It comes from years of training and experience getting up in some of the toughest crowds in show business. Sam is a regular performer at The Comedy Store – Hollywood, and producer of The Naughty Show, at Planet Hollywood, in Las Vegas. You can also catch him on the podcast Punch Drunk Sports, on SoundCloud.

Milwaukee Comedy contributor Steve Breese had an opportunity to speak with Sam about his new album, his career, and how he rocks and rolls audiences all over the world.
Milwaukee Comedy: You recorded your most recent album at the Punchline, in Sacramento. What have you decided to title this album, and what can listeners expect to be different from your previous albums—“Believe in Yourself” and “Crimefighter”?

Sam Tripoli: The title of the album is “The Diabolical” and it’s a two-disc album. This album is different in the fact that I tell some crazy-ass stories on the first album like getting chased by the police helicopters and doing a fundraiser for a redneck who wants to build a space shuttle! The second album is called “Friday Night Late Show” and it’s an hour of me battling drunken hecklers the whole time. I realize about five minutes in that the crowd is shit-faced and I have to start dropping bombs on them.

MC: How do you develop a concept for your albums?

ST: I pick a theme I want to do and just go to work. Like this one was storytelling, and I just go to work.  I worked through how to story tell on stage. It’s its own animal. Ari Shaffir and Bert Kreisher are the best at it.

MC: How would you describe your audience?

ST: People who love comedy and just want you to be the best at whatever you do. They are open-minded to all forms of comedy and don’t get offended at all.

MC: Who is your ideal audience member?

ST: I love everyone, honestly. I wouldn’t want too much of any one group of people. I love a mixed bag of people who don’t get offended and just want to rock.

MC: How would you introduce yourself to a room of strangers?

ST: Hey, my name is Sam Tripoli and I’m the man who rocks! Hahaha. Honestly, I just say hello. Onstage I do something I call “The Gator Roll!” That’s where I start simple with the crowd, grab them and then take them to deep waters. Start soft then drop hammer!

MC: How did you develop your voice, and what were some of the most memorable moments that helped you discover it?

ST: My voice started in Las Vegas. The Vegas comedy scene was started by Doug Stanhope and it’s just grown from there. Vegas crowds can appreciate some edgy stuff, and that’s why I am how I am onstage. I love honesty, and it all started in bars in Vegas. Then I got picked up at the world famous Comedy Store and I was trained in Mitzi’s dojo, having to follow Joe Rogan, Andrew Dice Clay and Eddie Griffin night in and night out for years.

MC: You have a great ability with working the crowd and tying it back into your material. I noticed it in both your albums and during sets at The Comedy Store – Hollywood. How would you describe the development process for working a crowd, and how do you typically develop material? It’s usually a good balance between topical and an honest stream of conscious thought. I sometimes picture you as the guy at a bar who has everyone’s attention, and he’s somehow influencing us to get rowdy and ready to get up to no good kind of fun.

ST: Yeah man, that’s me! I grew up in Upstate New York, and my friends were the first generation to really deal with divorce, and it was rough on some of them. So at some point, we all just kind of stopped fighting and started verbally destroying each other. We would go to the local pizza place and just start laying into each other. It taught me to not get emotional, think quick and kneecap people. Hahahahaha.

So it was very natural for me to be quick with people. I couldn’t get booked in comedy clubs in Vegas, so I had to make my own scene. So I started producing Bar Show all over Vegas. You have to be quick with bar crowds because they don’t think you’re a real comic. So I used my sharp wit and speed to get the crowd to listen.

Then I moved to LA and got picked up at the Comedy Store. I learned very quickly that your act can’t be a monologue. You must always be in the moment, but you have to be able to get back to your act. So the key is to use your crowd work to get to your next joke. I could do all crowd work if I wanted, but I love joke writing too much. I love coming with an idea and trying to turn it into a killer joke.

MC: You recently found a home for your comedy event, “The Naughty Show” in Las Vegas. Vegas is sort of like one giant outdoor bar. Do you feel like Vegas draws the best crowds for your show and humor?

ST: I kill everywhere from Toronto to Tampa to San Diego to Edmonton. I’ve worked very hard at being able to crack any code when it comes to comedy. Vegas is tough, man—really tough for a couple of reasons:

MC: Do you think “edgy and dirty” comedy is on the rise? How do you feel about the kinds of trends currently in comedy?

ST: Comedy is slowly coming around to where all other entertainment is. Look at movies, TV and music: All of it is much more real and honest. Stand-up comedy has been too slow to follow suit.  Something about a person with a mic is too raw for some people. What we allow music or dramas to get away with is mind-blowing. Look at the Black Mirror on Netflix. That show opened with a pig fucking episode. People’s skulls would explode if did a pig fucking joke onstage. I have a bit about how in Florida a woman got busted having sex with a dog 100 times? My bit is why did it take a hundred times for the cops to make an arrest? Just wanted confirmation? Make sure the case was air tight? Or the cops were a bunch of pervs? The crowd sometimes just stares at me.

Crowds sometimes think comedy shows are patty cake and that if you are laughing at something, you are condoning it. When you’re really just discussing the world we live in. Pop comedy is everywhere. Just pretty mannequins talking about what we already agree upon. I believe in talking about how weird it’s getting out there. That’s my shit!

MC: What are some of the drawbacks to the comedy boom?

ST: Too many comics willing to work for nothing.

MC: And last question, pretty generic. What sort of advice do you have for comedians you might think they haven’t heard or need to be reminded of?

ST: It’s about the journey not a destination. If you have to become Joe Rogan to be happy, you might be setting yourself up for depression. Become the comic you’ve always wanted to be. I’ve seen too many comics be more business than show, and they’re miserable. Be the comic you’ve always wanted to be and that is the surest way to find peace in your life.

I flunked first grade, and no one expected anything from me. I moved to LA and didn’t know anyone, and now I’m a working headlining comic who has played all over the world. If I focused on what I don’t have instead of being thankful for what I do have, which is beyond my wildest dream, I would go nuts. Be your biggest fan. Push yourself but no so badly that you go crazy. It is what it is. Enjoy the ride, because you’re a comedian!

Find more information about Sam Tripoli’s tour schedule and his upcoming album “The Diabolical” at SamTripoli.com. Follow Sam on Twitter, and catch more radical updates and interviews from Milwaukee Comedy.